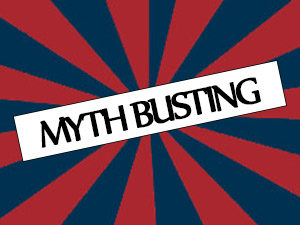 There are many reasons why engineers have been led to believe that condensing boilers do not fit a design application. Most of these reasons are inaccurate.

Myth #2 is similar to myth #1 in that older systems typically maintain a low ∆T in order to keep the hot water return temperature above condensing conditions. In condensing systems, temperature differentials of 30°F or higher can be designed to increase boiler efficiency by lowering the hot water return temperature back to the boiler. Increasing the temperature differential between the supply and return water has the added benefit of reducing the flow rate since the fl ow rate is related to the overall heat output of the coil. Therefore, the higher the ∆T, the lower the flow rate, which results in smaller pumps, less horsepower required to move the fluid, smaller piping, and other system benefits. 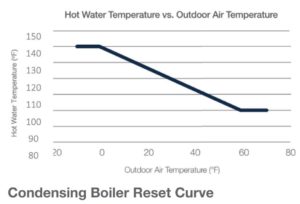 Hot water reset is a simple control strategy that has been used for many years on hot water systems with a lot of success. With condensing boilers, the hot water reset functionality based on outside air is generally built in, making this a relatively low- or no-cost item to implement within the system. Reset strategies have also been used on supply air and chilled water systems for years, so designers, operators, and contractors are aware of the design intent and goal of resetting system temperatures. The one item that should be understood regarding hot water reset is that there are conditions where resetting the hot water supply temperature will require additional flow to satisfy the load. In this scenario, hot water reset is less efficient as the additional pump energy required to move the fluid costs more than the energy benefits received from resetting the water temperature, so this condition should be avoided.

As for the argument that variable-flow-primary systems are more complicated, there are many installations that demonstrate primary-secondary systems are just as complicated. For example, installations that have a check valve in the common pipe. The check valve typically is used as a post-design solution on a system that has difficulty supplying hot water to the system where the primary-loop, or boiler-loop, flow rate is less than the secondary loop, or distribution loop. This condition creates mixing and provides a hot water temperature less than that created by the boilers. It eliminates free, bi-directional flow in the common piping, which is the main objective of a primary-secondary system.

In actuality, variable-flow-primary systems are simpler than primary-secondary systems as variable-flow-primary systems only require one set of pumps to handle everything in the system. Also, there is no mixing due to two hydraulically separate pumping loops and less equipment is required, so there are fewer devices to control. In variable-flow-primary systems, there are three items that must be addressed for proper system operation. The first item is a flow meter that can measure the water flow rate to the distribution system. In many designs, this is common practice for measurement and verification or for owners who are interested in tracking the energy consumption, so it may already be part of the design. The second item is a minimum-flow bypass with a modulating two-way temperature control valve, which is the same control valve at all the heating coils in the system. These two items work in parallel with one another as the flow meter ensures minimum flow to the boilers and/or pumps is always maintained thus protecting the equipment. Many condensing boilers have very low- or no-minimum flow requirements, but verify this with the manufacturer as the lower the minimum flow, the less bypassing that will occur.

Once the minimum flow is determined, the control logic for the minimum-flow bypass is to modulate the two-way control valve to meet the minimum flow rate of either the boiler or pump, which bypasses the system and returns to the boilers and pumps as shown in Figure 1. The minimum-flow bypass concept is commonly used in today’s system designs and is very similar to three-way valves in constant volume systems that reduce flow rate through the coil when the space is at reduced capacity, thereby bypassing excess flow around the coil and maintaining a constant flow rate at the coil.

The third item that is required in a variable-flow-primary system is another two-way temperature control valve at each boiler when there are multiple boilers operating in parallel. This control valve is a two-position isolation control valve that remains closed when the boiler is off and opens when the boiler is on. Like the hot water reset controls that are built in to most condensing boilers, this is also typically a function that the boiler controls can perform, if desired by the designer. The purpose of the control valve is to prevent fl ow through the boiler when the boiler is off, which results in bypassing and mixing with reduced hot water supply temperatures. Based on these three items as described, there are no additional components required for a variable-fl ow-primary system. Similarly, all of these items are typically used in a system in some form already, either for coil control or measuring system fl ow, which limits the need to understand new control algorithms or special sequences. 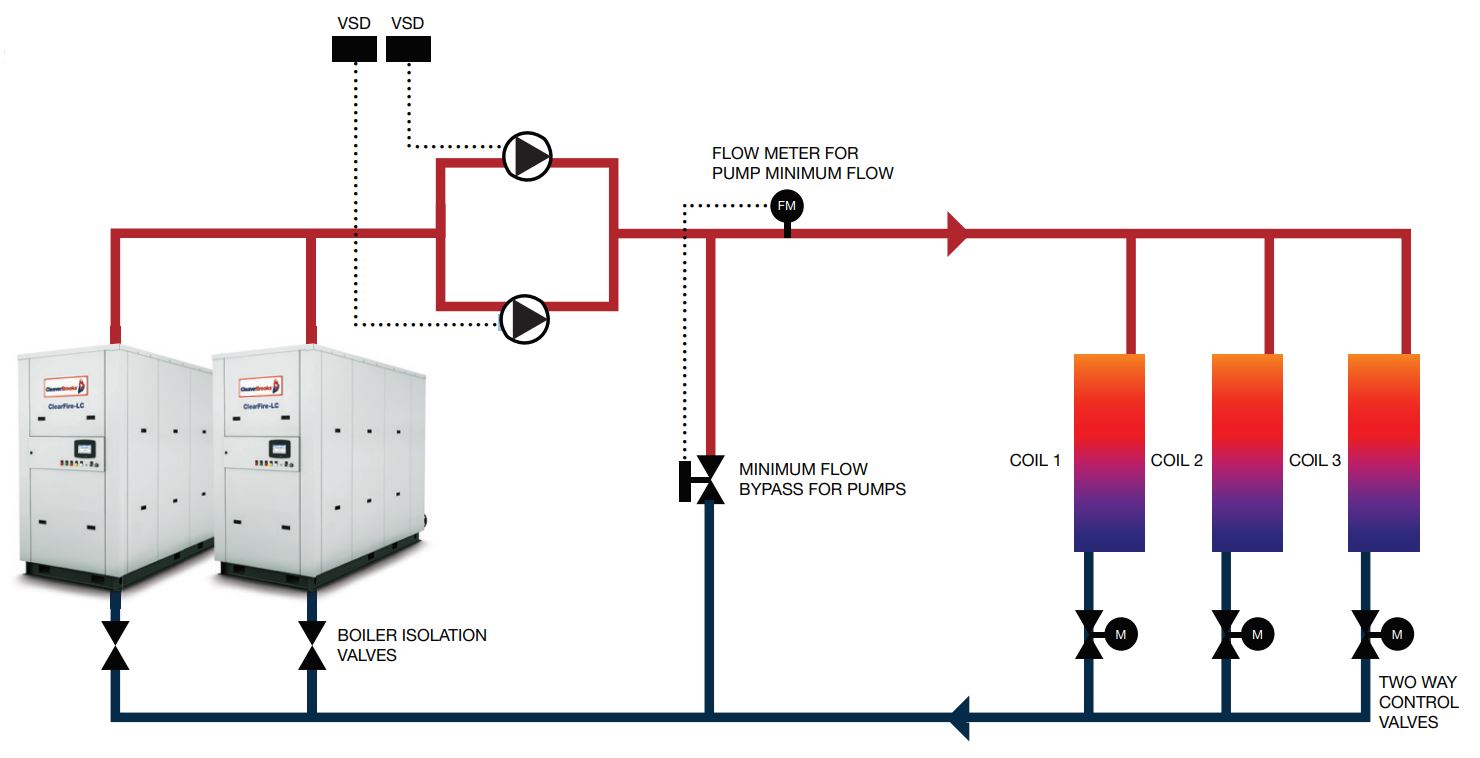 Piping distribution systems that deliver water to the system heating coils are designed using one of two strategies, either direct return or reverse return. Direct-return systems operate on the principle that the first coil in the distribution path closest to the boiler plant will also be the first coil to return the water to the boiler plant. Because of this, the piping distribution and corresponding pressure drop for this coil is typically much less than the last coil on the distribution network. As a result, if the flow rate to the coil is not properly balanced to have a pressure drop that effectively matches the other coil circuits, a large percentage of the system flow will take the path of least resistance, overflowing the closer coils and starving the coils at the end of the piping circuit.

Reverse return is a concept that evolved to solve the problem with direct-return systems. In a reverse-return configuration, the first coil to receive water from the central plant is designed to be the last coil to return water to the central plant. In theory, this equalizes the distance the water is pumped when distributed in the piping network and attempts to create a relatively equal pressure drop for each coil circuit. Figure 2 shows an example of direct return compared to a reverse-return system for the distribution system.

The reverse-return piping configuration suggests that balancing can be significantly reduced or eliminated. Unfortunately, this does not work as well in theory as each coil circuit has varying pipe sizes with different flow rates and dissimilar water pressure drops at each coil. For a typical system consisting of multiple air-handling unit coils with high flow rates and large pipe sizes mixed with VAV box reheat coils and terminal unit heating coils with smaller pipe sizes, each circuit will be completely different so balancing will still be required. Therefore, reverse return doesn’t solve the issue it is designed to correct. Another disadvantage of a reverse-return piping system is that it takes the designer twice as long to design since both loops are different and must be sized based on the flow in the pipe at any given point in the system.

One negative that is commonly cited for both systems is their limited expansion. Depending on the method of pipe sizing recommended by the designer, these systems can have no or very little capacity for expansion. The truth is the sizing of pipes dictates the expansion capacity, not the fact that a direct- or reverse-return piping configuration is used. An additional argument that is typically made about reverse return is that there are conditions where reverse return is no more difficult to do from a piping layout. For example, as shown in Figure 3, a building has a piping shaft in the middle of the building and piping can be routed in a reverse return around the floor. This configuration would be the only potentially recommended condition to use reverse return on the distribution piping as no additional piping is required. Despite this, it still takes twice the time to size all the piping. The piping circuits will not be equivalent since all the coils and flow rates are not the same, and only the floor will be reverse return unless a third riser pipe is used in the shaft to create a complete reverse return system, which increases first cost. Regardless of the method used, it is important to note that balancing will always be required to some extent. 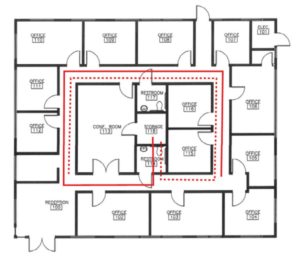 Figure 3: Reverse-return piping configuration on a floor where reverse return is relatively simple to design compared to direct return.

One time where reverse return could potentially pay off is when the equipment, flow rates, and pipe sizes are exactly the same, like in a boiler plant where there are multiple, similar-sized units. However, under this condition, the piping typically is much larger than in the distribution system, and the relative relationship of this equipment is so close that the equivalent length between individual devices is negligible. So, reverse return still doesn’t provide the value and would only be recommended if it can be done without adding pipe length or additional design time.

Figure 4: The hot water return temperature to a condensing boiler dictates boiler efficiency as the water is the first contact point with the flue gases and more condensation occurs with lower water temperatures. 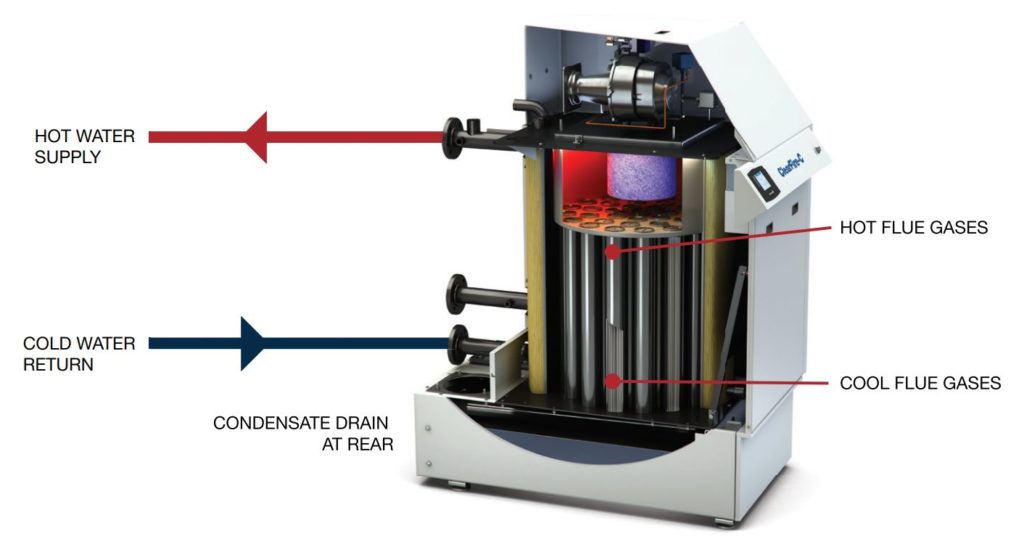 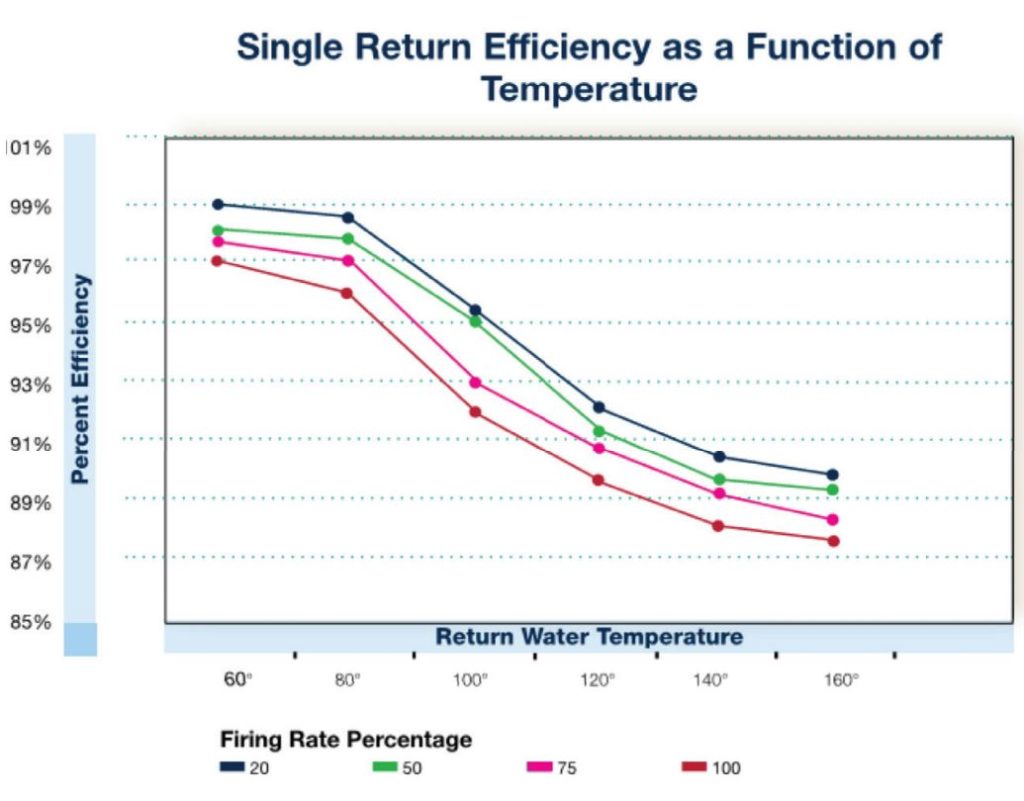 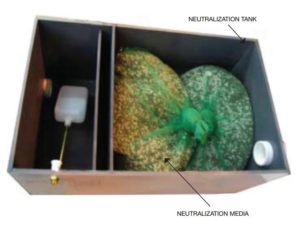 One area that does require more attention in a condensing boiler is the condensate drain. It needs to be checked to ensure the there is enough neutralization media for the capacity of the boiler. The neutralization kit is an acid neutralizer that increases the pH of the condensate to a neutral condition prior to discharging to the drain. When the media has expired, replacement is necessary – a task that can be completed in less than five minutes.

There are most likely more myths that exist for condensing boiler systems, but as explained, condensing boilers are not more difficult to design, install, or service compared to non-condensing boilers. In fact, the opposite is true for high-mass condensing boilers, which are generally more robust and require less attention. Systems can be designed for virtually any hot water temperature and ∆T provided a coil can be sized to provide the appropriate output at acceptable air- and water-pressure drops to maintain system efficiency. Similarly, hot water reset drives down hot water return temperatures, which is the main driver in system efficiency as more flue gases are allowed to condense with lower hot water return temperatures. Finally, variable-flow-primary systems with direct return should be considered the new paradigm since their system design is more straightforward and shortens design time.

We offer complete services for the total life of your equipment, including system planning, installation, in-house fabrication, training, customer support and maintenance. 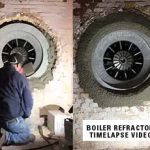 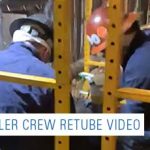 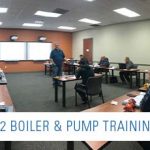